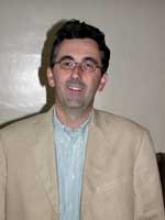 Olivier Hanotte, a Belgium molecular geneticist, joined ILRI (International Livestock Research Institute) in 1995 after a post-doc at the University of Leicester (United Kingdom) in the field of livestock and wildlife genetic diversity. At ILRI, for more than ten years he has been involved in Animal Genetic Resources studies. He is currently leading the ILRI ‘’Improving Animal Genetics Resource Characterization’’ project. He developed its molecular diversity component with research activities both in Africa and Asia. Training and capacity building play an important role in the implementation of the research activities of his group. Olivier has contributed to several AnGR characterization courses both in Africa and Asia organized by ILRI, regional organizations like ASARECA and international ones, like the joint FAO/IAEA division of Nuclear Techniques in Food and Agriculture. He is member of the editorial board of ’Animal Genetics’ and the ' ’Journal of Animal Breeding and Genetics’’ and has published extensively in peer reviewed journals.