Origin and distribution: The Kuri is a humpless longhorn (scientific name - Bos taurus longifrons), the very pure form of which is found in the island region of Lake Chad i.e. Djibadala, Koremeron, Debada and Bagdal (Malbrant et al. 1947). Other names of the breed at different locations are Baharie, Bare, Borrie, Boundouma, Dongole, Kouburi, Buduma, White Lake Chad, Boenca, Boyenca. The origin of Kuri cattle breed is obscure and uncertain. One theory considers the Kuri as a pure Hamitic Longhorn, which descended from the ancient Egyptian or Hamitic Longhorn as depicted in the Egyptian drawings. The Kuri probably branched off the stream of the Hamitic Longhorn on its north-westerly passage from Egypt and migrated south-west ward through the Sahara corridor to Lake Chad. Another theory considers the Kuri to be of the Sanga (Bos indicus x Bos taurus) type that originated from the intermixture of lateral-horned zebu and the hamitic longhorn in upper Egypt and present day Ethiopia (DAGRIS 2005). The Kuri predominates on the shores and islands of Lake Chad, which borders with Cameroon, Chad, Niger and Nigeria. Its main habitat is in southern Chad and north-eastern Nigeria but they are also found in northern Cameroon, in the N'Guigmi province of Niger and to a limited extent, in the Central African Republic. The breed was also reported from Jikawo district of Gambella region in Western Ethiopia (Alberro et al. 1982).

Physical characteristics: The Kuri cattle are predominantly white with pigmented mucous membranes; individuals with red, red pied, light grey, or dun, dark or black spots, reddish brown, greyish red or speckled markings are often present, white animals with occasional grey-coloured shoulders and dark spots with black or greyish black (Tawah et al. 1997). The Kuri cattle are tall among African breeds with long back, shallow body and a large bony rump. The body length ranges 133.7 to 144 cm in females and 152 to 165 cm in males. Heart girth in females is 172 where in males range from 183 to 211 cm. They have massive bulbous shaped horns with its length range 70 to 150 cm, the circumference of which may reach up to 100 cm (Epstein 1971; Queval et al. 1972; Renard 1972; Hall 1991). The dewlap is inconspicuous. There is no evidence of a hump in the Kuri found in the islands or on the shores of the Lake Chad but away from the lake it is obvious that there has been some intermingling with zebu (Payne 1970).

Peculiarity: The breed is adapted to the hot and humid climate, and in their original habitat, they are managed under traditional system feeding on grass on the small islands on the Lake Chad; they are excellent swimmers and follow their herdsmen through the water as they travel from an island to another; their bulbous horns are considered useful in floating [CS 1.1 by Mpofu & Rege].

Breed status: The 1991 estimate of Kuri population was 120 000 in Chad (which is ¾ of the total Kuri) and 2 350 in Cameroon (DAD-IS 2005). More recent estimates give a lower figure of 110 000 for the total population (Rege and Tawah 1999). The Kuri breed is said to be rapidly declining in numbers both in Nigeria and in Chad. Possible reasons for the declining trend include drought, protracted civil conflicts in the region, the retreating waters of the Lake and extensive crossbreeding with the zebus when they graze on the shores. Due to its inability to thrive outside its lake habitat, the Kuri is threatened (Rege and Tawah 1999). The trend is exacerbated by lack of improvement programmes for the breed and susceptibility to rinderpest. In early 1980s, a project was established to evaluate, select and distribute male animals based on milk yield performance in Chad (Adeniji 1983). There is no conservation programme for breed (Adeniji 1983; Tawah et al. 1997).

Utility: Tawah et al. (1997) indicated that the main use of Kuri cattle is milk and to a limited extent meat. Domestic Animals Diversity Information System (DAD-IS) puts the importance in the reverse order. Although it is said that there is milk let down problem, there is a record of 1260 kg of lactation milk yield over an average lactation period of 280 days (Epstein 1971). On the other hand DAD-IS indicates that the lactation milk yield range between 360 and 800 litres. It is also indicated that a Kuri cow is capable of producing as much as 6 kg of milk a day after feeding her calf, and fattens well on pasture and in feedlot. Meat quality of the Kuri is considered exceptionally good (Tawah et al. 1997). 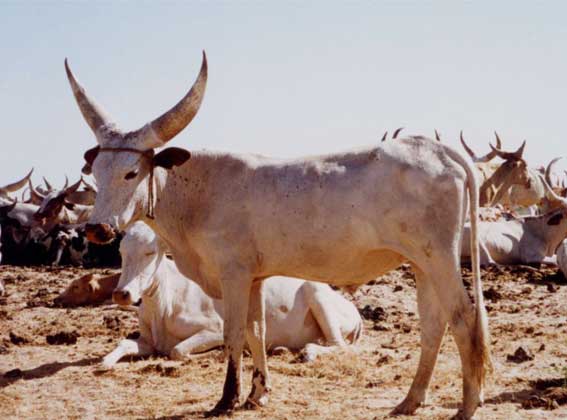 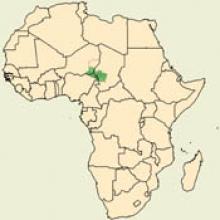 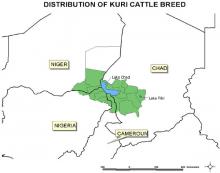