Origin and distribution: The homeland of Maasai Zebu is in southern Kenya and adjoining areas of northern Tanzania, particularly in Moshi, Upase and Usambara areas. All zebu cattle in Kenya, except the Boran and its derivatives, are referred to as Kenyan Zebu. They are believed to have descended from the recent introductions of zebu into Africa from Asia. The Maasai people are among the Nilo-Hamitic tribes that migrated during the 17th century into Kenya from the north and settled south of Lake Turkana. Because of the centuries old traditional practice of cattle raids, present-day cattle of the Maasai are very heterogeneous having some similarities with adjacent Kenyan Zebu breeds (Rege and Tawah, 1999). In Tanzania, the Maasai zebu are found distributed from northern to southern parts of the country. Fifty years ago the Maasai were probably the largest cattle owning tribe in East Africa but today the number of Maasai cattle is much smaller. Genetically, Maasai cattle were sub-clustered with the Nandi, Taveta, Turkana and Teso Zebu cattle (Rege et al. 2001).

Physical characteristics: The Maasai have long history of raiding and fighting, especially with the Nandis and Samburus; therefore, Nandi and Samburu stock influence their cattle. Some admixture with sanga blood, e.g. Ankole, is sometimes noticeable and this has influenced horn shape and hump size. Colour of the Kenya Maasai cattle is typically black but there are many variations. Black with white patches, red and white, grey, fawn and brindle, colour-sided, i.e. with a white top line, is also seen. They have a small slender head, with a straight or convex profile and short thick horns varying from 15 to 46 cm in length, and usually directed outwards and upwards or forwards, occasionally downwards; polled animals are also encountered. The ears, of medium length, are directed laterally and slightly backwards. The neck is moderately long and furnished with a well-developed dewlap. The chine is broad, and the hump approximately 30 cm high. Maasai cattle are somewhat larger and heavier than other Small East African Zebus. Body weight of an adult Maasai Zebu ranges from 300 to 445 kg in males and from 275 to 385 kg in females; height at the withers ranges from 118 to 140 cm in males and from 110 to 135 cm in females. The shoulder is oblique and well muscled, the chest relatively deep but sometimes narrow, the barrel deep and wide, and the prepuce prominent. The back and loins are straight and of medium length, the rump is drooping, and the tail long and thin, ending in a full brush. The thighs are fairly muscular; the legs rather short, slender and well placed, with small hard dark-coloured hooves. The udder is small and fleshy; the teats are short (Epstein 1971).

Peculiarity: The Maasai cattle are adapted to live under semi-arid climatic conditions. They are managed under inadequate water supply and trek long distances in search of water.

Breed status: Population estimate in Kenya in 1990 was 1 398 000 whereas less than 100 000 in Tanzania in the same year (Rege 1999). In Kenya, their number is stable whereas in Tanzania they are increasing. Although they are not at risk of disappearance, due to increasing threat from crossbreeding to the Sahiwal breed, in-situ conservation management is recommended. 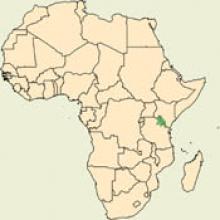 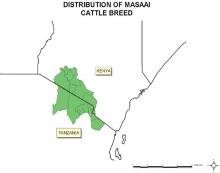