Origin and distribution: The Mashona cattle are also known by local names including Makalanga, Kalanga, Makaranga, Ngombe dza Vakaranga, Shona Mashuk and Mashukulumbwe. The original Makalanga (Makaranga, Ngombe dza Vakaranga) cattle of the Shona people of the eastern half of Zimbabwe were of Sanga type, similar to the Tonga cattle of Zambia. These were decimated by the cattle plague of 1896-98 and East Coast Fever epidemic of 1900-06 (DAGRIS 2005). Subsequently, large numbers of Angoni cattle were introduced and crossed with the remaining Makalanga cattle. Rigorous selection for traits of economic importance by commercial breeders led to progressive improvement. The breed was later renamed to Mashona, and the breed association and herd book were established in 1954 (Felius, 1995). The Mashona are widely distributed in the eastern half and central Zimbabwe and their territory extends westwards to 29° 30' E (area covering Gokwe, Lupane and Tjolotjo) and eastwards as far as the border of Mozambique and over into Tete (Mason and Maule 1960) including various areas of Matebeleland, particularly the Matopo Hills.

Physical characteristics: The Mashona is considered to have received substantial influence from the Angoni cattle and some workers have classified it as a zebu-sanga type. However, they are small Sanga type cattle. They have fine bone and well-developed and proportioned body; they are strong and sturdy, have short, straight, close and glossy hair with a prominently black colour followed by red. Other colours are brown, dun, yellow, cream, bridle, red-and-white and black-and-white in various combinations. Black-and-tan merging into each other is also a frequent pattern. Mashona breeders favour solid colours, particularly black. The head is wide around poll and muzzle, and long and narrow in between. Eyes are small and prominent, which makes them differ from the small, sunken and protected eyes of the zebu breeds. Before genetic selection, the Mashona had typically long and heavy horns ranging from 45 to 60 cm. In cows the direction of the horn was outward, upward and backward with pointed tips turning forward; in the bulls the curve was less and the horn was coarser, stronger and shorter; some cattle were polled, and these are liked by the Mashona people as they are considered to maintain their body condition in the dry winter and fatten more readily than the horned animals. The prepuce and umbilical folds are less developed and the tails are very long. In addition very little udder tissue and small teats are observed. The modern Mashona cattle, developed since 1954 through its breed association, are predominantly polled.

Peculiarity: The Mashona are small sanga type cattle; the breed is well adapted to the local semi-arid and sub-tropical environment. They are known to be efficient feed converters and are profitable as compared to the Tuli, Afrikaner and Brahman. The breed is also known for its good mothering ability, survivability, easy calving and fertility.

Breed status: Historically it is believed that Mashona cattle in the past mixed with Angoni cows imported across Zambezi to increase the African owned herds in the Mashonaland after heavy cattle losses to rinderpest and East Coast Fever outbreaks in 1896 and 1900 respectively (Epstein 1971). Performance testing was developed in 1968 at Makoholi Experimental Station. Thereafter, in 1990 Indi-breed Private Limited was formed. This, in association with the Mashona Breed Society, established in 1954, run a group-breeding scheme and is recognized as a source of Mashona animals of high genetic merit [CS 1.7 by Khombe]; [CS 1.8 by Mpofu]. After a decade of selection for beef production and polledness, the present day Mashona are black or red, most are polled and have a mature weight of 275 to 350 kg. The present population is estimated at 500 000 and the breed is not at risk (DAD-IS 2005).

Utility: The Mashona cattle are used mainly for meat and draught. The body weight ranges of mature males and females are 350-635 and 260-410 kg, respectively. Ward et al. (1983) indicated that Mashona cattle have good pregnancy and re-conception rates than Afrikaner and Tuli. In addition, the estimated mean annual production of weaned and 18-month old crossbred calf per cow weight was greater for calves born from dams of Mashona (31.0 and 49.2) as compared to Tuli (28.2 and 43.2), Afrikaner (21.8 and 30.1) and Brahman (29.2 and 40.6 kg) (Moyo 1993). They are also docile working animals.

Harvey K. 1987. The history and development of the three Indigenous cattle breeds of Zimbabwe. In: The Indigenous Cattle Breeds of Zimbabwe, Proceedings of a workshop held at Matopos Research Station, Edited by Jerry Grant, 26 to 27th February. Research and Specialist Services, Harare.

Khombe C.T. 1995. The Conservation and Selection of Indigenous Beef Breeds in Zimbabwe. In: Proceedings of the International Symposium on Livestock Production Through Animal Breeding and Genetics. Ed: K. Dzama, F. N. Ngwerume and E.

Mason I.L. and Maule J.P. 1960. The Indigenous Livestock of Eastern and Southern Africa. Technical Communication No. 14 of the Commonwealth Bureau of Animal Breeding and Genetics, Edinburgh. 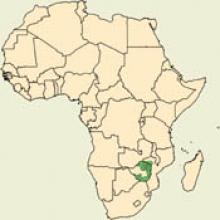 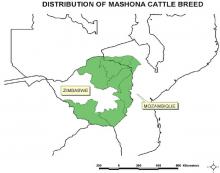