Origin and distribution: The N'Dama, also known as Boenca, Boyenca, and Faouta Longhorn, is a humpless Longhorn (Bos taurus longifrons). Until recently, Humpless (Bos taurus) Hametic Longhorn cattle breeds are believed to have descended from the first domesticated cattle populations of the Humpless Hamitic Longhorn cattle in the region's so-called the 'Fertile Crescent', possibly 9000 BC (Payne and Hodges 1997). These were said to be the first cattle to be introduced to Africa via the land connection with Asia by nomadic people and have spread to the west and south of Egypt. Archaeological findings, however, have led to the new theory that there was an African centre of domestication in the Sahara from southern Libya and north-western Niger to southern Egypt (MacDonald 2000). Further genetic studies have also suggested that the present-day humpless cattle populations are so divergent from similar cattle populations of Europe that separate domestication could have occurred in Africa (Bradley and Loftus 2000). This is supported by the genetic evidence from Hanotte et al. (2002), which also indicated an exogenous but minor genetic influence of non-African origin from Europe and/or Near East in the breeds of north and northeast of Africa as well as localised areas of southern Africa. These African taurine cattle were also influenced by a slow genetic introgression by the zebu cattle (Bos indicus) of Asian origin. There is now convincing genetic and archaeological evidences for the domestication within Africa of these African taurine cattle breeds. Presently, the Humpless Longhorn cattle are represented by two breeds - the N'Dama and the Kuri, though the two breeds are quite distinct in their morphology (Rege and Tawah, 1999). N'Dama cattle are believed to have originated from the Fouta Djallon plateau in Guinea, and are now found in the whole of coastal West and Central Africa: Senegal, The Gambia, Guinea-Bissau, Guinea, Sierra Leone, Cote d'Ivoire, western Mali, Ghana, Togo, Nigeria, Cameroon, Central African Republic, Gabon, Congo (Brazzaville), and Democratic Republic of Congo (former Zaire), particularly in the regions infested by tsetse fly (DAGRIS 2005).

Physical characteristics: The N'Dama is compact and set on short legs of fine bone; neck is thick and deep; back is fairly broad, well-fleshed and straight from withers to tail head. They have a short and broad head, straight profile and broad muzzle; the average horn size is about 60 cm and the horns typically curve upward and outward or have a lyre-shape, although there are different horn shapes and occasional polled individuals, especially in Sierra Leone and Guinea; the dewlap and umbilical folds are poorly developed; the typical coat colour is fawn with darker extremities, lighter underside; common solid colours are light to dark fawn, grey, dun, light red, chestnut, red with black head; belly and lower part of tail may be white. The breed is of medium size, being 100 cm height at shoulder for cows and 120 cm for bulls, and with a large and strong head.

Peculiarity: The breed is known for its tolerance to trypanosomosis (Ngamuna et al. 1988; Claxton and Leperre 1991; Dwinger et al. 1992; Mattioli et al. 1993) it is also markedly resistant to tick-borne infections (Mattioli et al. 1995), but not to rinderpest. In addition, the breed is well adapted to stressful humid and dry tropical climates.

Breed status: Population estimates by DAD-IS (2005) totals to 6 618 713 head, distributed within the countries of West and Central Africa.. For the last 65 years, large scale herds of this breed have been improved in Zaire by a private Company named as Compagne J. Van Lanckeic which owns over 40 000 head of pure N'Dama and has improved the mature weight of the breed by 30-50 kg without affecting hardiness. Large herds are exclusively kept for beef under ranching condition in Guinea; commercial herds are also kept in Zaire.

The breed has been selected and crossed with Jersey in Côte d'Ivoire since 1955; it has also been crossed with the Sokoto Gudali in Ghana [CS 1.9 by Abogaye]; [CS 1.24 by Dempfle & Jaitner], after its introduction in 1923; it has been crossed with the West African Shorthorn in Togo. Since 1986 some N'Dama has been exported from Senegal to the Virgin Islands-there they have been bred to Red Poll and a new breed, the Senepol has resulted (Maule 1990; Rege and Tawah 1999).

The N'Dama is a multipurpose breed with relatively low milk production, although partial milking is frequently carried out in the traditional herds of West Africa [CS 1.9 by Aboagye]. In these circumstances the yield for humans is estimated at 70-100 kg per cow per year in most countries with a higher output of 178 kg/year being reported from Mali (FAO 1980). The full lactation yield is considered to be about 500-600 kg (Payne 1970; Mason 1984; Portar 1991). A dairy herd of N'Dama maintained in Sierra Leone from 1944-1952 averaged 540 kg during lactation period of 283 days in one five-year period, with highest yields around 1 150 kg per lactation (Touchberry 1967).

Oxen are good work animals (Starkey 1982; Spencer and Eckert 1988). Under the traditional system, heifers give birth at about 48 months and the interval between calvings average 20 months. Under ranching conditions involving grazing, salt licking, provision of minerals and dipping, the heifers calve at 35 to 42 months (Starkey 1984; Maule 1990). 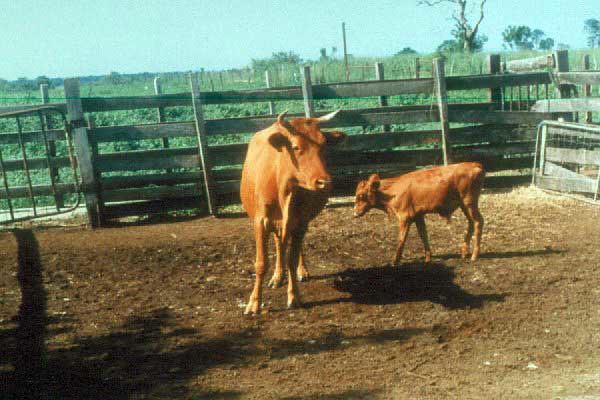 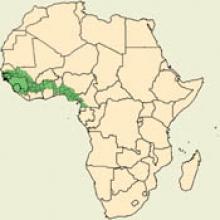 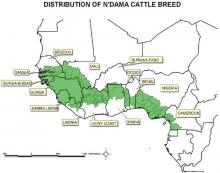