Origin and distribution: The name Amabowe was formerly applied to cattle of Ngwato Setswana type in the southwest corner of Zimbabwe, from Tuli to Plum tree. Disasters of the 1896 rinderpest reduced the number of these cattle and much of the rest were crossed with Afrikaner. However, remnant herds of this breed were then collected in the Tuli area, hence, the breed has been recognized as Tuli. It is distributed in several countries in Africa, especially in the neighbouring Botswana and South Africa; it has also been used in forming the synthetic breed called the Akouma in Gabon; it has been exported from Zimbabwe to Gabon, Australia, Australia, United States and Canada (Rege and Tawah 1999; Mpofu 2000b).

Physical characteristics: Tuli is a large sized, African sanga breed. It is heavy boned with long wide spreading horns and long strong legs; the colours are mostly red, red-and-white and golden brown. The Tuli have been selected in favour of their golden-brown colour and polledness, and against shyness and poor breeding.

Peculiarity: The breed is known for its above average fertility, calving ease and good maternal ability and beef productivity.

Breed status: Although the estimated total number of the Tuli cattle in the national commercial herds is about 10 000 for Zimbabwe and 2 339 for South Africa (DAD-IS 2005), no information is available on the number of Tuli cattle under smallholder management and for other countries. In general, the attempts made to improve and conserve the breed in different countries have kept it from being endangered. In 1945, the Tuli Breeding Station in Zimbabwe was established. There are 7 stud farms in Zimbabwe and excess bulls from these farms are used in many commercial farms. The Tuli breed society of Zimbabwe was formed in 1961. The South African Tuli Breed Society is closely linked to the Namibian and Zimbabwean ones, which together started joint genetic evaluation of the Tuli breed. Breed societies for the Tuli were established also in Australia and the United States (Mpofu, 2001) [CS 1.2 by Mpofu].It is also conserved using semen preservation (DAD-IS 2005).

The age at first calving and calving intervals are reported as 36 months and 407 days, respectively (DAD-IS 2005).

Table 1. Body weights of Tuli cattle at different ages compared with other breeds 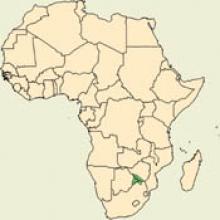 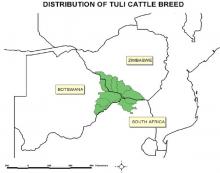